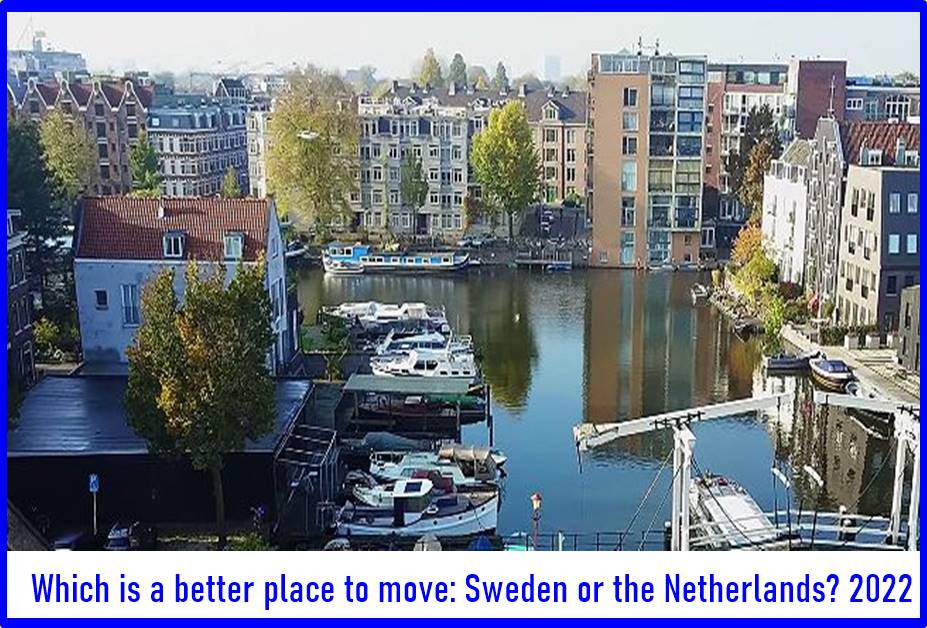 It depends on many things I’d say…

Housing situation: the Netherlands is cramped, one of Europe’s most densely populated countries, i.e. expensive. Sweden is not densely populated, though Stockholm is and is subsequently as pricey. My choice: Sweden outside Stockholm.

Immigration laws: Both are EU-countries, meaning that for a non-EU citizen it’s pretty similar. If you have employment or a spouse with an EU passport you are generally welcomed with open arms. If you don’t, you are politely asked to stay away. My choice: a tie.

Employment: As a programmer, you would find it quite easy to find employment in both countries, though given that a greater share of the Swedish economy rests on programming skills, I think you’re behaving more options in Sweden. My choice: Sweden

Language: The Dutch and the Swedes speak excellent English, the accents can be prominent – but overall you’d be surprised. You can learn Swedish, Dutch can be quite a different story (speaking that is, reading is easier). My choice (obviously biased): Sweden.

Taxes & Welfare: the Netherlands has lower taxes, which is good for anyone without a kid or two. If you have children, the Swedish higher tax payments for a lot more kickbacks (12 months parental leave, cheap daycare, free universities, etc). My choice (as a father of three): Sweden.

Drugs: You may get high legally in the Netherlands, you may not in Sweden. My choice: Netherlands (I prefer to say no out of choice, not because the law tells me to)

Weather: Same problems – the Netherlands and the part of Sweden where there are actually people living is comparable to Nova Scotia or Washington State. My choice: Holland, San José, CA

Getting around/out: Both countries excel in public transport. The Dutch also are world champions of bike paths.

Which is a better place to move: Sweden or the Netherlands?

Southern Sweden (the flatlands) are comparably on par when it comes to biking, while Stockholm and Gothenburg are a bit challenged by their topography.

The Netherlands is in the center of Western Europe. By train you can be in Cologne, Paris, Brussels in a few hours. There are frequent cheap flights to the UK etc. Sweden is further away.

The south is OK, but if you’d be moving to Stockholm, leaving Sweden for a weekend abroad is a project (the Baltic states would be the best option).

With that said, if you appreciate nature then Sweden wins hands-down. The Swedish law allows anyone to access pretty much every square inch of the countryside and it’s easily accessible.

The Dutch nature is probably there, but after 10+ visits to the country, I’m still waiting for anyone to invite me to go mushroom picking, fly-fishing or moose hunting.

My choice: Sweden (but if you’re not into green spaces it’s the Netherlands)

What is the common denominator between Denmark, Canada, New Zealand and the Netherlands? Apart from being known for their high quality of life, they are consistently among happiest destinations world in the rankings of most studies. Next Saturday is Happy Day, and Kiwi.com, the leading online travel technology company, has analyzed the evolution of travel to these countries in recent years.
Before starting, what factors influence a destination to be considered happy?
“World Happiness Report 2020”, prepared United Nations Sustainable Development Solutions Network, points out “the Nordic countries are characterized a virtuous cycle in which several key institutions and cultural indicators of society feed off each other,

including a well-functioning democratic system, generous and effective social benefits, low levels of crime and corruption, and satisfied citizens who feel free and trust each other and government institutions.”

The study concludes the so-called “Nordic happiness” is also within reach of other countries further away from this geographical area, such as Switzerland or Australia. Similar patterns usually govern the formula for success: “Ensuring that state institutions are of high quality, not corrupt, capable of fulfilling what they promise and generous in caring for citizens in various adversities.”

The “happy countries” with the most bookings on Kiwi.com are Denmark, Holland, and Sweden in Spain. Copenhagen, Billund, Aarhus, Stockholm, Gothenburg, Amsterdam and Eindhoven are the most popular major cities. At the other extreme is New Zealand, probably due to the high price of fares —five times more than the average for destinations in northern Europe— and the long distance that separates it from Spain.

In the last four years, the percentage of one-way tickets issued in Spain is notable in the case of Australia (76%), Sweden (74%), Denmark (74.4%) and New Zealand (71.5%), which could indicate changes of address for work or family reasons to those countries.

Although the truth is that only Copenhagen has managed to enter the TOP 10 most booked places in Spain on Kiwi.com since 2018, other destinations do appear in the TOP 30, such as Amsterdam, Stockholm and Reykjavík.

The company’s data shows that, since 2018, the average stay in Denmark, Sweden, Holland and Switzerland is less than three days —perfect destinations for a weekend getaway—, while in Iceland and Canada, the time ranges from one and two weeks and in more distant destinations such as Australia it amounts from three weeks to two months.

According to a Washington State University study recently published in the journal Tourism Analysis, people who travel frequently are 7% happier than those who don’t. In 2021, searches from Spain to travel to these destinations are currently headed by Amsterdam, with more than 1.5 million searches, followed by Zurich and Copenhagen, with nearly 900,000, and Geneva, with 760,000. In a band of around 400,000 searches since January are Stockholm, Oslo and Helsinki.
A Spaniard in Copenhagen

Ignacio Escudero, an electronic engineer by profession, has lived in the Danish capital since September 2017. He moved there from Madrid to study for a master’s degree and currently works at a start-up in the health sector.
“I agree that Copenhagen is a happy destination; there is a better standard of living than in Spain and a much calmer mentality,” he says. “From here, I would highlight both the relaxed work culture and the people’s honesty. At first, I had planned to return to Spain as option B if I got bored of being here or if the conditions required it, but the truth is that the more time passes, the more time I want to spend here”.