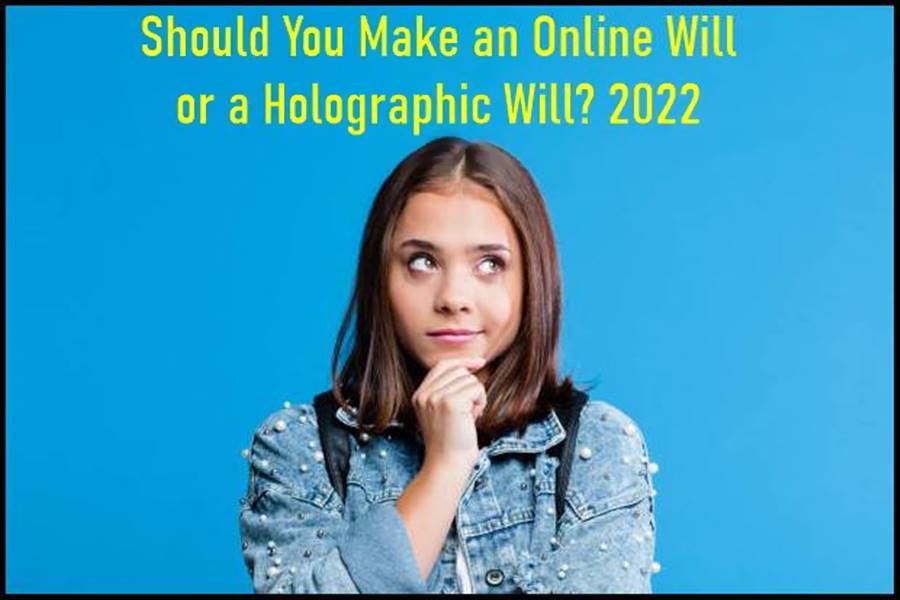 Should You Make an Online Will or a Holographic Will? 2022

When it comes to writing wills, most people want to ensure that they have full control over the content. It is why they prefer to write one with pen and paper at their homes. However, it does not always work out smoothly, and they end up facing technical difficulties.

These can range from not knowing what to include in a will to being clueless about how to format it. People also consider different alternatives for writing their wills on paper; some purchase a DIY (Do It Yourself) will kit, and others make an online will. If you wonder which among these options is the best, this article will guide you towards the right choice.

What are Holographic Wills?

If you prefer to write and sign your will on paper, you will be making a holographic will, also known as an olographic testament. It is handwritten, and most testators (people who write their will) do not involve attorneys in the process.

General requirements of these wills specify that they must be handwritten. Additionally, the testator should insert the date and their signature at the end. They can skip the witnesses while signing the document. Though it doesn’t sound problematic, many complications can emerge.

The most pressing issue is that each state has a different set of legislations that apply to these wills. For instance, in Maryland and New York, only the army officials have the privilege of making their holographic wills. States like Connecticut and Washington will only honor your handwritten will valid if you wrote it in another state.

Holographic wills can leave room for many ambiguities, even if you think you are doing it right. An unintended lack of clarity in a will can be disastrous for your family. It is because deciding what you meant after your death would be nothing more than speculation.

Not having legal expertise or counsel is also a severe drawback while writing holographic wills. Will laws are also subject to change, so there is always a possibility that the state will refuse to acknowledge your handwritten will after death.

The purpose of the will is for the testator to express before the court how his property is to be disposed of after his death. People don’t typically draw up a lengthy document, collect witnesses to sign a document, file a death certificate, and don’t notarize a document unless they intend to make a will.

However, sometimes people express their intention to dispose of their property after death in letters they did not write as a will. In this case, as long as the testator entirely writes the document, the court may treat the document as a holographic will.

A holographic will is simply a will written entirely by hand by the testator. It does not require any witnesses. For states that recognize them, it is not that handwritten wills are necessarily preferred to machine wills.

Instead, recognizing holographic wills is a way of honouring the intention to transfer ownership after death where that person would otherwise not be able to fulfil all the requirements for a valid choice.

For example, suppose you handwrote a personal letter to a friend with no intention of making a last will and will. Still, your letter expresses your intent to hand over your property upon death (assuming you die without a subsequent will). In that case, the court may accept your letter as a holographic will.

Some people write their entire will by hand because they want to do so. Others write their wills by hand because that’s all they can do. Holographic wills are often the result of a testator’s last-minute testimony who decides to leave the estate to someone who is not in his will. Sometimes they show up because someone is on the verge of dying and hasn’t made a will yet.

For example, there is a case where a farmer was seriously injured in a tractor accident. Stuck under a tractor in a winter storm for more than ten hours, he wrote on the fender of his truck with a penknife: “In case I die in this mess, I’ll leave it all to my wife.”. The farmer died later that night. The probate court accepted the fender of the farmer’s truck as a holographic will sufficient to pass the farmer’s estate to his wife.

As long as the letter is entirely handwritten and meets the other will’s requirements, the court may consider each legacy a holographic will.

What makes a holographic will valid?

In every state, certain formalities or rules must be followed for a will to be valid (in writing, certified by a witness, signed, etc.). However, with any choice, especially with the more modern approach to wills, what makes a will valid, even if it does not meet all the required formalities, is that the court accepts a good choice. The testator’s intention.

In the modern age of wills, as long as the court can identify the will (the intention to dispose of property upon death), some rules allow the court to overlook minor omissions and errors in inheritance laws.

Do holographic wills often get contested?

Yes. Holographic wills are more likely to be challenged than statutory wills (wills signed by two or more witnesses) because there are fewer formalities to protect against fraud.

Why Online Will is Better?

With the changing dynamics of time, people have devised smarter ways of accomplishing things. It enlists drafting wills online, but it can mean different things to different people. Some consider it as taking an online template for their will, and others refer to the online will-making services.

These comprehensive services ask the testators to complete a few steps, such as filling out a questionnaire and selecting the executor. As compared to holographic wills or merely printing the template, these professional online services are the best option.

They also hire solicitors who specialize in wills’ legislation and review what you write. They can identify and close any loopholes you may not recognize. Consequently, the online wills are also compliant with the laws of your place. So, the risk of someone contesting your will or declaring it invalid after your death is much lower.

Should You Make an Online Will or a Holographic Will? 2022