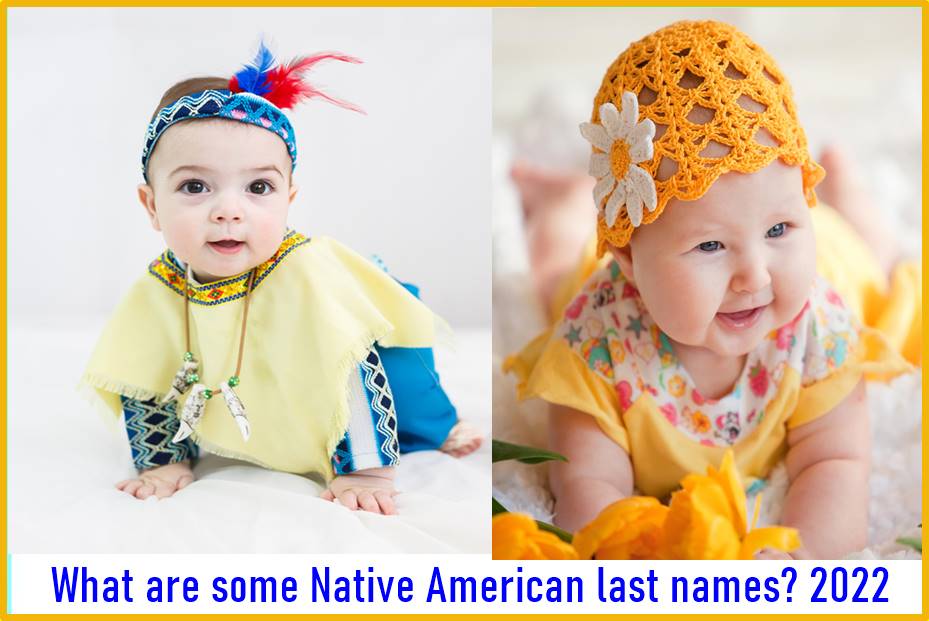 Last names are relatively new in all cultures. In Europe, many people in many places did not have last names until 1800 when bureaucracies demanded them. In many places, a patronymic was more common. Iceland still does this today. In other places only the elite had surnames.

In North America, there were hundreds of utterly unrelated languages and cultures and naming traditions. Native people took the last name or were required to have last names at different times across what is now the country.

There is not one pattern. In places with early contact, a man took “English” or “French” or “Spanish” names. In Alaska, some took Russian names. Friends, In some places, people translated the names of parents and made them surnames.

The Wisdom of the Native Americans
$13.08
Buy on Amazon
Bestseller No. 2

Krouterebs This is A Map of American Native Tribe Nations...
$7.99
Buy on Amazon
SaleBestseller No. 4

The Natives: This Is Our America
Buy on Amazon
Bestseller No. 6

There are many Native languages that have sounds that English does not have. So, for example, the name Seattle is an attempt to pronounce siʔaɫ. It has two syllables.

The mark that looks like a question mark without the dot at the end is a glottal stop as in “Uh oh.” It had a “glottalized barred lambda” at the end, which is an explosive sound.

Later the pronunciation shifted to a lateral “l,” a sound something like “Alsh”. Hudson’s Bay Company traders gave him the nickname Le Gros (The Big Guy). He was also given the baptismal name of Noah Sealth.

When in some places names were translated, sometimes the translations were poor. For example, I stayed on the Young-Man-Afraid-Of-His-Horses property for a few weeks on Pine Ridge.

It really meant that the person with that name was so feared in a battle that even the sight of his horse would inspire fear. Santana Young Man Afraid of His Horses was crowned Miss Oglala Lakota Nation at the 30th Annual Oglala Lakota Nation Wacipi, Rodeo, and Fair in 2015.

In the Navajo Nation, many people have names that are clan names or descriptive names that were then attempted to put into English. Examples are Etcitty (from atsidí —smith) or Nez (big). Others were translated, like Many Goats (a clan). Others were from a grammar confusion. Begay (from biyeʼ) means “son of”.

In Navajo grammar, that comes at the end after the name of the person and was confused by Americans as a last name. Hopi’s last names are often simply attempting to write Hopi in English letters. Examples are Komelastewa, or Banyacya, or Loloma.

When the Federal Government forced all the Navajo into the Reservation at Bosque Redondo. They recorded each person’s name. Those who didn’t provide their own last name were assigned, Begay. So it kinda meant “no last name”. In reality, Begay was a transliteration of the word meaning “his son” or “her son”.

In Northern Canada, the locals didn’t have last names before European contact, likely because they lived in such small groups that it was possible for everyone to have one unique name.

People are still sometimes given a name in their native language. I went to school with a girl who’s the name translated to “the sweet rain that falls at the beginning of summer” (it was much shorter in Chipewyan!) and she went by Honey Rain.

However, when it came time to sign treaties or attend school, it became necessary to adopt last names. Often, these names were simply picked by the priests who kept all the early records, many of whom were French.

Last names hold a lot of history behind them, which traces back to ancient times. Native American last names are not only pleasant-sounding but have a fascinating traditional backstory to them. What are the most exciting Native American surnames from various tribes?

They were all pronounced the same, and all descended from the same Mr. and Mrs. Burke, but the story goes that a long-suffering postal worker got fed up with trying to sort all the letters addressed to one of the dozen Mr. Burkes in town, and assigned several people a new spelling.

TL;DR: Many natives never had surnames, and so had them assigned by whoever kept records in the town, usually clergy.

Native American names come from many diverse tribes and landscapes, including the Hawaiian islands. Because of this diversity, naming traditions tend to vary as well.

A few names of places or tribes, such as Dakota and Cheyenne, have seen some popularity over the years, but most Native names—even famous ones like Pocahontas and Sequoyah—are rare.

If you are thinking about a Native American name for your child and you have a connection to the culture, consider researching the name or talking to a member of that tribe.

If you aren’t of indigenous heritage but love the idea of a Native name—or simply want to honor the culture—you’ll find inspiration in this list.

Just remember, when using a name from a background other than your own, you want to show respect by taking the time to understand the meaning and pronunciation of the name you are considering.

What are some Native American last names? 2021

Native Americans have been in the Americas for at least 15,000 years, and it’s easy to see their influence in art, music, food, games, products, words, and names throughout the United States. While many rivers, towns, and states have names that are Native in origin, Native American names are not as prominent in mainstream culture.

Some examples are rather old-timey, and today, it may not be easy to find a person who bears it. However, they have an exciting history.