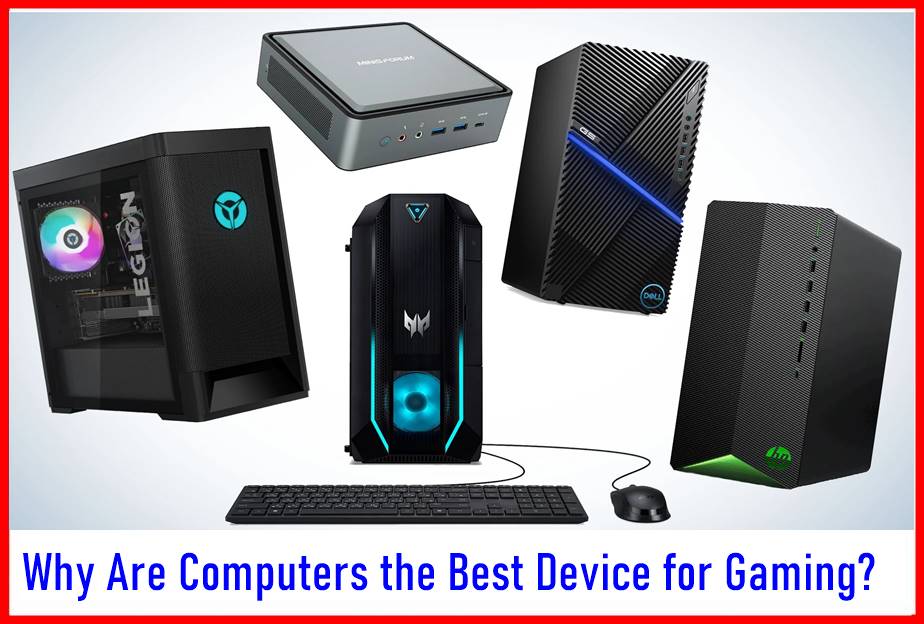 The debate about which device is best for gaming on is one that has raged for decades. Console owners have always trumpeted the simplicity that dedicated gaming machines offer over computers.

Traditionally, companies like Sega, Nintendo, and Sony have built their products to be low-cost by developing in-house architecture optimized specifically for gaming. However, in more recent years, the gap between consoles and PCs has narrowed, with the Xbox Series X and PlayStation 5 both essentially running on AMD Zen 2 computer chipsets.

Whilst all this is true, computers still offer a much better overall gaming experience, making them the ultimate platform for playing your favourite titles. Here’s why.

Over the last few generations of games consoles, there have been around 2-3,000 titles officially released. That doesn’t mean there are only 2,000 games available for the PlayStation 4 though, as backward compatibility and homebrew help to bump this number up a little.

However, it doesn’t come anywhere close to the volume of games available for computers. On Steam alone, 9,050 new titles were released for the platform in 2018 and the Steam catalogue surpassed 50,000 in total in early 2021.

That doesn’t even include the myriad of titles released before Steam launched and ones that remain exclusive to other marketplaces like the Epic Games Store.

Backward compatibility also boosts this number up by hundreds of thousands as enthusiasts have helped to preserve almost every computer game ever created, including the first-ever title SpaceWar! which was created back in 1962.

PC players also have access to online casino games that aren’t generally available on consoles. The number of options here reaches into the thousands since most sites offer several hundred different video slots in addition to variants of the most popular table games. More established brands like Betway also offer innovative live casino games that use a human dealer and a video feed instead of just computer-generated graphics. This creates a more immersive and realistic casino experience that has proven popular among many players.

Through emulation, PC users can also run Android and iOS games and content from older consoles. All of this combined means that PC gamers can choose from over a million titles, exponentially more than what is available for consoles.

If you’ve tried to get your hands on a PS5 recently, you’ll know that they are almost impossible to find. A global shortage of microchips is making it difficult for Sony and Microsoft to keep up with the demand for their new consoles.

A similar problem is happening for PC gamers that want to buy the newest graphics cards, with those involved in crypto mining and price scalping buying giant swathes of stock. That said, it isn’t as big of an issue for computer users as they can simply choose to buy a lower-end or older card instead.

While this means they won’t get quite the same graphics performance, it does mean they can enjoy all of the latest releases now instead of having to wait weeks or even months to get their hands on a console.

After a while, PC gamers can also buy additional or replacement components to swap out what’s already inside their computer, creating a gaming experience that is continually improving.

With these upgrades, PC gamers can continue to enjoy cutting-edge technology while console owners will have to wait for the next generation of hardware to be released in several years’ time.

When the PS5 was first revealed to the world, many people speculated that Sony would make custom skins for the white fins that cover the side of the machine. However, this rumour was soon put to bed when a third party was forced to remove their skins from the market, with the Japanese giant clearly signalling that it wanted to retain the clinical and sleek look of its machine.

For PC gamers, no such problems exist. If you want to add RGB lights to your case, change its colours, or add other customizations, then you have a vast array of options to choose from.

Additionally, you can customize the devices you use to interact with your games, helping you to gain an edge in titles where fractions of a second in reaction time can decide between victory and defeat.

Gaming mice and keyboards with an arsenal of hotkeys allow you to assign specific commands to each key or button, allowing you to perform a melee attack without having to move your thumb, or throw a grenade by using your middle finger, keeping your index digit free to go straight back to firing.

Overall, PC gamers have much more choice when it comes to which games they play, how they play, and what they play on, creating a much more enjoyable experience.