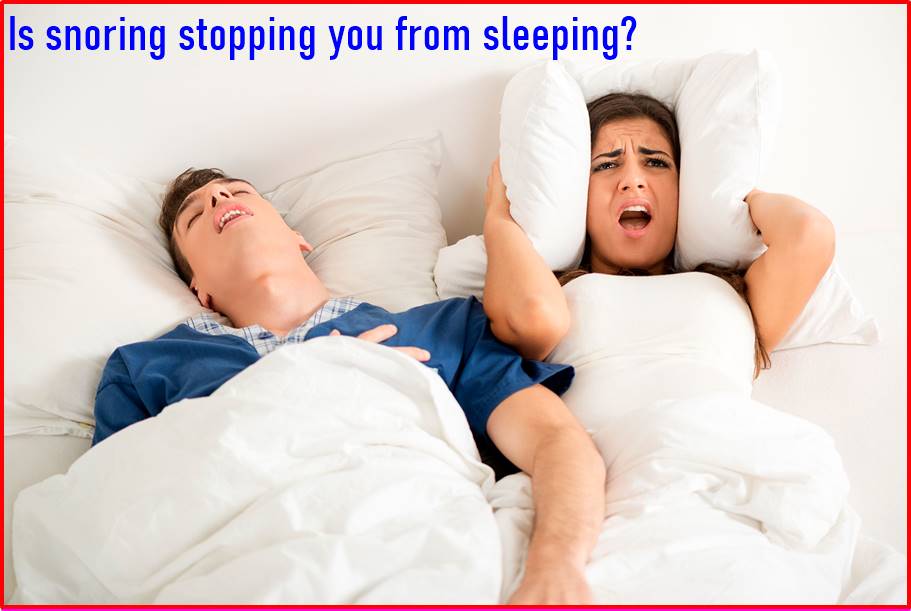 Is snoring stopping you from sleeping?

Normal snoring doesn’t interfere with the quality of your sleep as much as sleep apnea, so if you’re suffering from extreme fatigue and sleepiness during the day, it could be an indication of sleep apnea or another sleep-related breathing problem.

HOW you snore reveals WHY you snore

(A) When the airways are clear, respiration and gas exchange can proceed normally.

(B) If the tongue obstructs the passage of air, the extra effort required to breathe causes a snoring sound.

Do you sleep with a truck?

Certain factors can cause or accentuate this sound breathing, such as:

Snoring can have a direct influence on the lifestyle of snorers and those around them. Some people will avoid long journeys by train, plane, or bus for fear of snoring in public.

Some people avoid going on vacation, sleeping with friends, in a group, etc., for fear of snoring. A study showed what people saw as the consequences of snoring on their lives, and the graph to the right illustrates the results:

Why snoring is not minor

Listen to this short interview explaining why you shouldn’t take snoring lightly, as it can indicate the presence of much more severe health problems, including sleep apnea.

Snoring in children is also problematic because the rapid development of their brains requires high blood oxygen levels.

2. Everyone snores, so it’s normal.

Snoring only affects me so that I can ignore it.

Snoring is caused by nasal congestion and will stop when the congestion goes away.

There is no cure for snoring.

Not just men, women too!

➡ Snoring treatment should not be done by just any professional.

You can use specific preventive measures to decrease or eliminate snoring.

Avoid drinking alcohol and taking sleeping pills as this helps to relax the soft tissues of the palate and throat, which makes snoring worse.

The most common cause of snoring is overweight. Studies have shown that weight loss in fat people is often enough to decrease noise intensity during snoring significantly. In some cases, this can sometimes eliminate snoring altogether.

You are having a good posture while sleeping can decrease or eliminate mild or moderate snoring. Sleeping on your back increases the chances of snoring. There are some means like special vests and vibrating alarm bracelets that can remind the sleeper to change improper sleeping.

Head and neck position during sleep

The position of the head and neck can influence the opening of the upper airways and indirectly the snoring sleep apnea. There are “anti-snoring” pillows that slightly improve breathing by keeping the neck stretched out.

Nasal congestion decreases the passage of air and can contribute to snoring. A doctor may prescribe decongestants or nasal sprays with steroids to reduce congestion. The use of strips placed on the nose during sleep and aimed at increasing the opening of the nostrils can also help the passage of air.

Specific surgical procedures are used for cases of severe sleep apnea. They consist of modifying the soft palate and the uvula to widen the upper respiratory tract to facilitate air passage. These interventions are rarely recommended to treat simple snoring without sleep apnea because their effectiveness is limited, unpredictable, and inconclusive in the long term. Resection of the soft palate can even, in some cases, increase snoring and sleep apnea.

When the situation allows it and, following a medical diagnosis, it is possible to use a dental appliance made to measure each patient from their teeth models. This device advances the mandible to clear and open the upper respiratory tract, allowing better air passage during breathing and reducing snoring. Several studies have demonstrated the effectiveness of such devices in the treatment of snoring.

Is snoring harmful to your health?

Heavy snoring can sound funny to your sleep partner, but the condition is no joke. Snoring is often the sign of a condition called obstructive sleep apnea, which raises the risk for diabetes, obesity, hypertension, stroke, heart attack, and other cardiovascular problems. Is snoring stopping you from sleeping?

How much snoring is normal?

Nearly everyone snores now and then, but for some people, it can be a chronic problem. Sometimes it may also indicate a serious health condition. In addition, snoring can be a nuisance to your partner.

Light, infrequent snoring is normal and doesn’t require medical testing or treatment. Its main impact is on a bed partner or roommate who may be bothered by the occasional noise. Primary snoring occurs more than three nights per week.

Is snoring a symptom of Covid 19?

While consensus about the nonrespiratory symptoms is strongly advocated through rigorous reporting guidelines, this series gives an account of transient snoring symptoms experienced by laboratory-confirmed COVID-19 patients; and for better communication, this complication will be referred to as COVID-19 transient.

Being overweight increases fat around the neck, compressing and narrowing the throat. But thin people do snore too, and many who are overweight do not.

Why does my husband snore so loud?

The sound your partner produces when snoring while asleep occurs when air is restricted either through their nose or in their throat. When lying down, the muscles in their upper airway relax which creates what is known as ‘airflow turbulence’.

Is snoring stopping you from sleeping

Is snoring stopping you from sleeping?