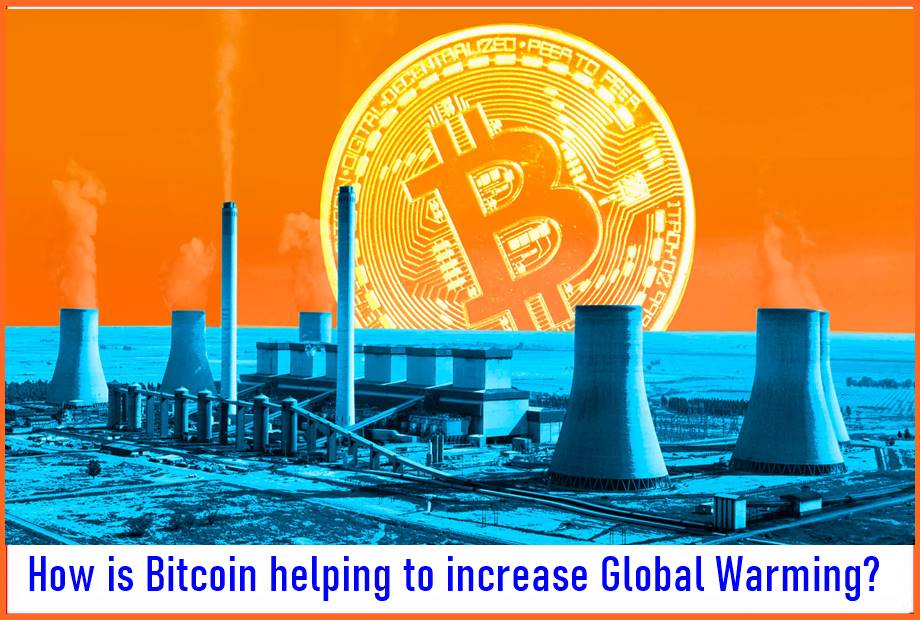 How is Bitcoin helping to increase Global Warming?

Bitcoin is the only thing that is dominating the market sphere at large. In the recent decade, bitcoin has gained a global position in the trading market. Prominent investors are highly inclined to trade bitcoins or other cryptocurrencies due to their volatile nature. Bitcoin and different types of cryptocurrencies are decentralized in nature.

Thus they can be utilized by the people for maximization of their monetary profits, unlike trading in the stock market. But certain factors about bitcoin are necessary to understand its stance on the effects of global warming. Bitcoin is not a real currency but merely a virtual one. Bitcoins are not physically distributed among the people of a nation.

These decentralized currencies are made through enormous amounts of power generations through a process known as ‘mining.’ The process includes large supercomputers to utilize continuous power for generating one bitcoin. This is how Bitcoin or decentralized currencies are made. The only drawback of bitcoin, other than its volatile and unpredictable nature, is that trading in bitcoin leads to massive electrical consumption. This furthermore affects the climate significantly, contributing to speedy global warming. Visit Here To Know More about public and private key

The effects on Global Warming.

To understand how massively intricate the situation has become, we need to look into the recent times bitcoin has heavily affected environmental growth and preservation. Even though bitcoin is such a currency that offers you the most beneficial opportunity in the digital gold market, energy consumption and its impacts on the environment will soon outweigh the profits made through it.

Energy consumptions can also be detailed down as the number of carbon footprints produced through usage. The carbon footprints recorded in the year 2020 were nearly as big as Bangladesh. Some nations are using cryptocurrencies extensively for the profit of their government which has estimated total devastation to the environment.

Various environmentalists and economists are at the debate about how to curb the massive drawbacks of bitcoin mining. Bitcoin has the true potential to push global warming way beyond 2°, which can be scary for the world. Bitcoin being an exclusively virtual level of exchange highly demands high energy consumptions for the whole process of trading. The only way this problem can be tackled is by completely eradicating the process of trading in bitcoins.

How is Bitcoin helping to increase Global Warming

The energy consumption problem has prevailed on this planet for a long time. As the cost of living rises with the population, more virtual transactions and trades are taking place. This has indeed brought the whole world accessible through our fingertips. But all this at the cost of our very planet, which at this point has no return. Even if pollution can be controlled at will, how will someone live without the world of the internet and trade in the 21st century?

And it is only getting bitterly because miners must frequently boost their computing power to compete with different miners. Also, because rewards are commonly cut in half to make mining financially beneficial, miners have to filter more transactions or lessen the electricity they utilize.

As an outcome, miners seek out affordable electricity and upgrade to faster, more energy-intensive computers. Between 2015 and March of 2021, Bitcoin energy consumption boosted almost 62-fold. Because the whole Bitcoin network has subsidized millions of dollars in hardware and infrastructure. It would be hard to evolve to a different energy-efficient system, mainly since there is no oversight body.

Nonetheless, several projects are seeking to decrease the carbon footprint of Bitcoin and cryptocurrency in widespread use. Tesla CEO Elon Musk joined with the CEOs of top North American crypto mining corporations about their power usage. The upshot was the innovation of a modern Bitcoin Mining Council to facilitate energy translucency.

How is Bitcoin helping to increase Global Warming?