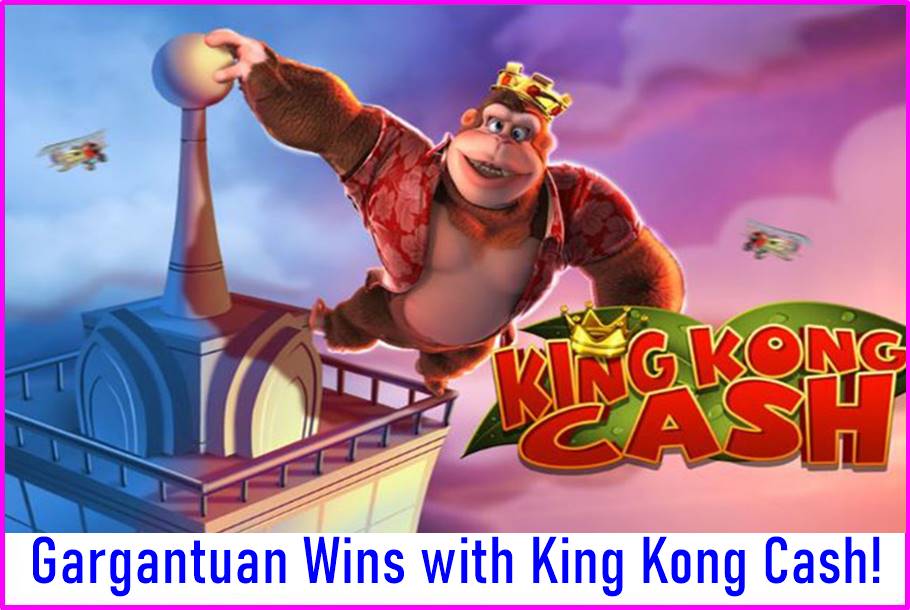 Blueprint Gaming’s King Kong Cash is a jungle-inspired slot game dominated by the monster ape himself. Whats impressive about this game is that every spin results in coin bonuses, re-spins and activating extra games from the primary game. King Kong Cash has five rows across three rows and twenty pay lines.

How to play King Kong Cash

First the low-value symbols. They are represented by the playing card values jack to ace, whilst the high paying ones are represented by various jungle inhabitants, namely a rhino, a parrot, a tiger and an alligator. Naturally, the most top paying symbol is the games logo.

Winning combinations are made from obtaining three, four or five symbols, placed on any of the reels.

King Kong Cash’s Wild symbol is a barrel with coins scattered around and it replaces all other regular symbols and thus creates winning combinations. If you get the Bonus symbol (King Kong himself) and get three or more of them, then these trigger a bonus round.

Sleepy Kong Bonus – is where a spin wakes up King Kong, and then the following features are activated:

Golden Barrel Super Spin – Once Kong is awake, grab a barrel and throwing it at the main screen causes an explosion adding more barrel symbols on the reels, like a chain reaction.

Banana Cannon Wilds – Kong will fire banana bombs at the screen when the reels are in motion. Once he does the bomb explodes, and all random symbols turn into Wilds. Maybe, if you are lucky Kong will begin stomping on the ground causing your reels to spin but rest assured, all Wilds remain in place.

The Bonus Boost is where more bonus symbols appear from Kong waking up and throwing a barrel at the main screen causing multiple explosions.

King Kong Cash is an excellent game because of the multiple bonus rounds that players can unlock within the game.

Scoring three bonus symbols will start the bonus round by selecting which bonus round you will be playing:

Empire Free Spins – Played across three reels with the Empire State Building in the background. On all the reels you need to collect three golden Monkeys to advance to the next higher level.

King Kong Trail – given a choice of barrels which hide different rewards, with each compensation a few more steps to the next one, like a trail. Get a Golden Monkey, and this will take you immediately to the King Kong Cash Big Money Bonus or worse, a Bomb that ends the bonus round and takes you back to the primary game.

Barrel Blast – This screen has barrels in the background you will be taken to another screen with some barrels. Hidden in each barrel are, and once you select a matching set of three, you receive that multiplier.

Golden Kong Free Spins – This bonus round expands the reels to 5×4 and an incredible 40 pay lines. All Wilds scored on the main screen increases the value of the Wild Bank on the screens right-hand side.

The quantity of Wilds stored in the bank will be randomly placed on the reels during each spin. Each spin will provide you with a choice of three barrels containing either a Bomb or Golden Donkey. The Bomb ends the bonus round, and all winnings are credited back to your account. The Golden Donkey will spin the reels again with each Wild in a new position.

Jam-packed with features makes King Kong Cash a game for all levels to play. The 3D graphics are fantastic and frequent wins means punters should definitely give this game a try. Stop monkeying around and get started!