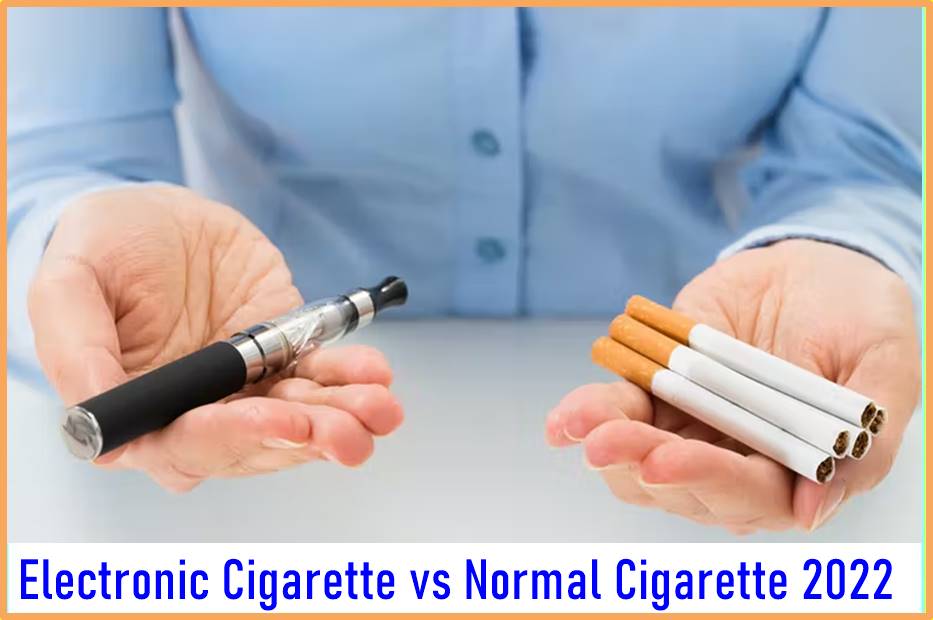 As soon as electronic cigarettes entered the market, people started using them as a safe alternative to traditional smoking. The critical difference between a regular cigarette and an e-cigarette is that the latter doesn’t contain tobacco. But is it just the tobacco that makes smoking harmful, or there are other toxic chemicals we need to be aware of? This article will compare electronic cigarette with regular cigarettes in detail to help you make a wise decision.

For those of you who don’t know much about e-cigarettes, these are battery-operated devices, also known as vape pens, containing a liquid that is heated to form a mist for inhaling. This liquid contains flavors, chemicals, and nicotine that mimics the sensation of actual smoking with reduced health risks. A new brand of e-cig liquid has come up with vaping liquids that offer you the option to add 0% nicotine to make it even safer.

Let’s compare the electronic cigarette vs normal cigarette with each aspect one by one:

When you are smoking a regular cigarette, it burns the tobacco, and you inhale hundreds of toxins along with it. Tobacco does massive harm to your body, and the paper that burns with it adds up the number of harmful toxins. All of this results in lung diseases, heart diseases, cancer, or many other illnesses. On the other hand, electronic cigarette delivers by heating up the liquid with the help of a battery. There is no burning involved which makes the whole process much less harmful.

No matter what kind of smoking you are doing, there will be harm and illnesses involved with it. The only way to stay away from harm is to quit smoking entirely. Using e-cigarettes have helped a lot of people in cutting down the cigarettes and eventually completely quitting.

Nicotine is the main drug that makes smoking so addicting. It stimulates stress during withdrawal and makes you feel relaxed as soon as you are exposed to it again. In smoking cigarettes, people are not really addicted to the tobacco itself, but the nicotine.

Nicotine is found in e-cigarettes as well; the difference again is that it delivers it through vapors, whereas a normal cigarette delivers it by burning tobacco that comes with many toxins. The good thing about electronic cigarettes is that you decide the amount of nicotine you want in your vaping liquid.

Electronic cigarettes are way different from a regular cigarette, and vaping is not really smoking. However, it does mimic the sensation, and people get a similar experience as smoking a cigarette. There have been multiple kinds of research that have shown that people were able to quit smoking with vaping because it gave them the same feel as traditional smoking with far fewer risks and harms. Vaping has the same hand-to-mouth gesture as smoking, and it can be social as well. So overall, it gives a similar experience to the users, and they are able to quit or reduce smoking regular cigarettes.

There are different methods that people try to control their craving for cigarettes, such as nicotine patches or gums, cold-turkey, etc., but vaping contributed the most in controlling the cravings by giving a similar feel.

It is not easy to reduce the consumption of cigarettes, let alone quit it. Electronic cigarettes are a great way to assist in quitting cigarettes by offering nicotine with fewer toxins as compared to burning tobacco. They let you remain social, spend less, and when you eventually quit smoking, you will feel better.

There is no doubt that e-cigarettes are much less harmful than regular ones; they are still not harmless. The end goal should be to quit smoking and vaping, not find an alternative to smoking. You can start your journey to quit smoking with Terpy; they offer a wide variety of vaping liquids with an option to choose zero nicotine.