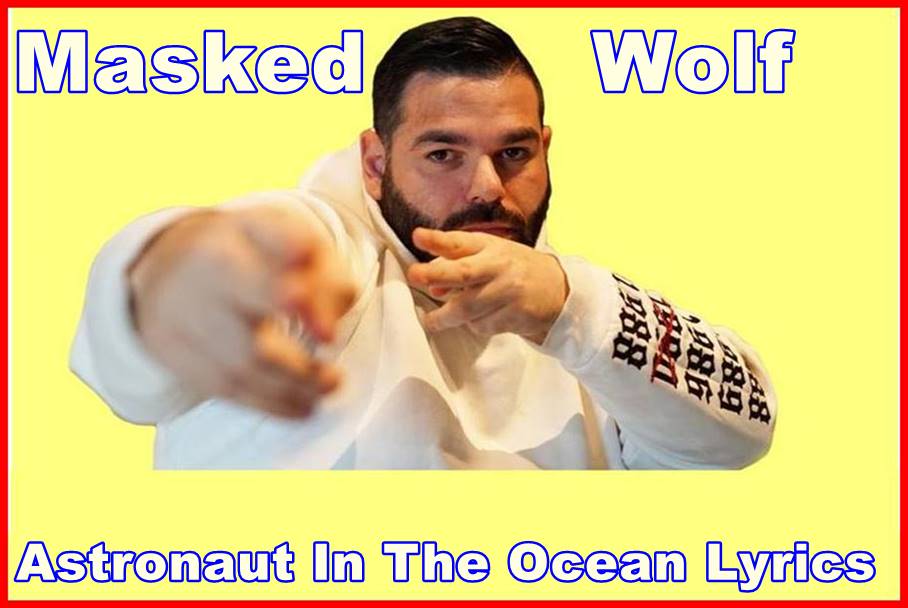 I had no idea who Masked Wolf was until I got thirsty with his song “Astronaut In The Ocean” on Tik Tok. I’m sorry, I’m not sorry.

Now I have a much better idea of who he is as an artist: he wants to lean on the positive side and envision every one of his songs as a hit. “Astronaut In The Ocean” certainly blew us away. In his Genius climax, he explains that the song is actually about his depression, and he doesn’t feel like he’s where he wants to be. “I’m in the [astronaut] suit, and I’m just not in the right place.”

It may be downtime and mental struggle, but man is it a BOP. At least, I think so. So let us enjoy this.

What you know about rollin’ down in the deep?
When your brain goes numb, you can call that mental freeze
When these people talk too much, put that shit in slow motion, yeah
I feel like an astronaut in the ocean, ayy

What you know about rollin’ down in the deep?
When your brain goes numb, you can call that mental freeze
When these people talk too much, put that shit in slow motion, yeah
I feel like an astronaut in the ocean

She say that I’m cool (Damn straight)
I’m like, “Yeah, that’s true” (That’s true)
I believe in G-O-D (Ayy)
Don’t believe in T-H-O-T
She keep playing me dumb (Play me)
I’ma play her for fun (Uh-huh)
Y’all don’t really know my mental
Let me give you the picture like stencil

Fallin’ out in a drought
No flow, rain wasn’t pourin’ down (Pourin’ down)
See, that pain was all around
See, my mode was kinda lounged
Didn’t know which, which way to turn
Flow was cool but I still felt burnt
Energy up, you can feel my surge
I’ma kill everything like this purge (Ayy)

Let’s just get this straight for a second, I’ma work (Yuh)
Even if I don’t get paid for progression, I’ma get it (Uh, get it)
Everything that I do is electric (Ayy)
I’ma keep it in a motion, keep it movin’ like kinetic, ayy (Yeah, yeah, yeah, yeah, yeah)

Put this shit in a frame, better know I don’t blame
Everything that I say, man, I seen you deflate
Let me elevate, this ain’t a prank
Have you walkin’ on a plank, li-li-li-li-like
Both hands together, God, let me pray (Now let me pray), uh
I’ve been goin’ right, right around, call that relay (Masked Wolf)

Pass the baton, back and I’m on
Swimmin’ in the pool, Kendrick Lamar, uh (Ayy)
Want a piece of this, a piece of mine, my peace a sign
Can you please read between the lines?
My rhyme’s inclined to break your spine (Spine)
They say that I’m so fine (Fine)
You could never match my grind (True)
Please do not, not waste my time (Wolf)

What you know about rollin’ down in the deep?
When your brain goes numb, you can call that mental freeze
When these people talk too much, put that shit in slow motion, yeah
I feel like an astronaut in the ocean, ayy

What you know about rollin’ down in the deep?
When your brain goes numb, you can call that mental freeze
When these people talk too much, put that shit in slow motion, yeah
I feel like an astronaut in the ocean

‘Astronaut in the Ocean’ Lyrics – Video

‘Astronaut in the Ocean’ Lyrics by Masked Wolf

As implied at the end of this post, until the release of ‘Astronaut in the Ocean,’ Lyrics Masked Wolf was not necessarily a successful musician. That may explain why, in his own words, he was dealing with a severe case of mental depression when he composed this song. That said, it’s important to mention that mental health has also been his signature theme.

And so, what we were dealing with in terms of the title is an analogy. The way it has been described is based on the fact that astronauts tend to train to be in space performing similar tasks underwater. And metaphorically, the artist’s depression is also ‘deep’ like the depths of the sea.

So that is why he ‘feels like an astronaut in the ocean,’ with the astronaut being himself and the Ocean as a symbol of the general and enveloping anguish he is experiencing.

And as mentioned above, in the first verse, he hints that that may be because his career didn’t progress as idealized. But dwelling too much on the depressing aspect of this song takes away from its conclusive meaning. As far as the actual verses go, ‘Astronaut in the Ocean’ is not about the artist being overwhelmed by his problems but his determination to overcome them. As things progress, the lyrics themselves become more boastful.

In fact, in many ways, Masked Wolf comes across as their quintessential rapper. For example, he presents himself as a womanizer and an artist with exceptional lyrical abilities. But there is a humble, even semi-religious tone under it all.

Conclusively, we can say that yes, the vocalist in question can sometimes feel weighed down by the world’s weight. But he possesses a kind of faith and work ethic that won’t allow him to be truly defeated by her.

Release date of ‘Astronaut in the Ocean Lyrics.’

Masked Wolf is a rapper from Australia who became professionally active in 2018. And heading into 2021, Astronaut in the Ocean, which came out on June 6, 2019, remains his most famous (and only chart-worthy) song.

This track was initially released under a label called Teamwork Records. But after exploding on social media, Elektra Records re-released it in early January 2021. In the process, Elektra also signed Masked Wolf to a multi-album deal. However, he remains affiliated with Teamwork. And the following month, the song went on to surpass 100,000,000 plays on Spotify.

This track topped the music charts in the Czech Republic and Slovakia. It turned out to be especially popular in Europe, where it was placed in many countries. It chartered in approximately 20 nations in total. And it included “Astronaut in the Ocean lyrics,” appearing on the Billboard Hot 100 and UK Singles Chart. In the latter case, he broke the top 20.

Masked Wolf wrote this song alongside its producer, Tyron Hapi, another Sydney-based musician. It didn’t explode until a year after its release, with the intro, in particular, being used heavily by TikTokers. And overall, it seems like the success of this track may turn out to shed a whole new light on hip-hop emanating from Australia in general.

NFL quarterback Patrick Mahomes, who used the song in an Instagram post, has also contributed to its virality.

Who is the masked wolf?

As of early 2021, not much public information is available about Masked Wolf. He is 29 years old and based on the rapper’s images, and he doesn’t necessarily appear to be a native (i.e., white) Australian—he more as he looks like someone who might be of Middle Eastern descent.

Meanwhile, the name Masked Wolf alludes to the artist’s dual nature. It means that he is (in his own words) someone ‘you wouldn’t even think of as a rapper’ outside of the studio.

Masked Wolf thanks Kendrick Lamar and his 2012 track ‘Swimming Pools (Drank)’ in this song.

Who is Allen greene

Question: Who sang the “Astronaut In The Ocean” song?.

Answer: The song “Astronaut In The Ocean” is sung by “Masked Wolf.”

Question: When was the song “Astronaut In The Ocean” released?.

Question: Who wrote the lyrics of the “Astronaut In The Ocean” song?.

Answer: “Tyron Hapi, Masked Wolf” has written the lyrics for the song “Astronaut In The Ocean.”

Question: Who gave the music of the “Astronaut In The Ocean” song?.

Answer: “Tyron Hapi” has composed the music for the song “Astronaut In The Ocean.”