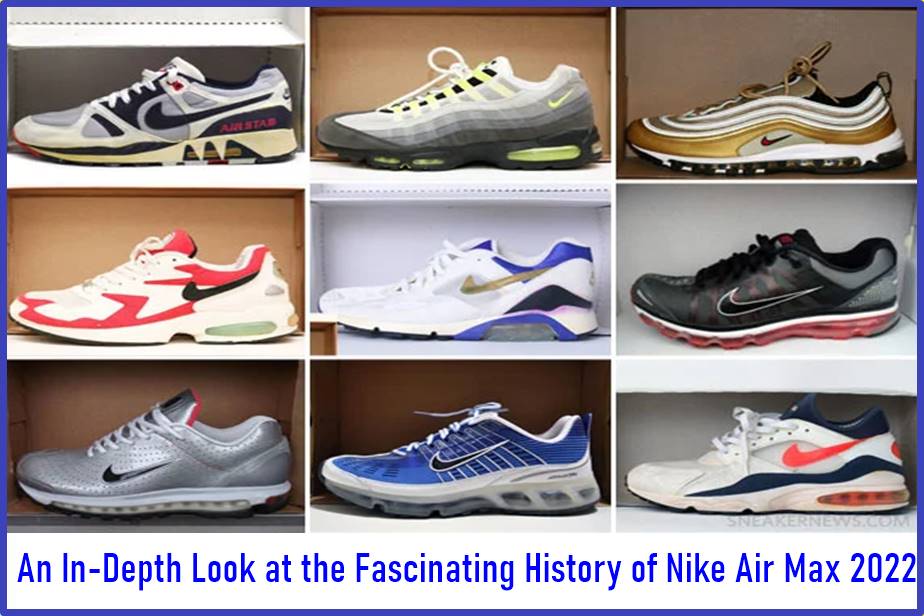 According to Nike’s official sales figures, the brand increased its revenue by 19% to $44.5 billion during 2021, with the Nike Air Max 95 leading the charge.

These astonishing gains after a difficult year are part and parcel of the history of Nike, thanks to the brand’s ability to anticipate consumer needs and give their clients what they want.

The Nike Air Max has played a pivotal role in the success of Nike with its long reign as one of the best sneakers available in any era. Travel with us along the Nike Air Max’s road to glory, here.

The History of Nike

Nike, Inc. came about in 1964, under the name Blue Ribbon Sports. Bill Bowerman, a track and field coach, teamed up with a former student, Phil Knight, to set up a footwear distribution company.

He was an exceptionally successful coach, so it was a natural progression for him to start experimenting with designs to improve the performance potential of the available athletic footwear.

They opened a retail outlet in 1964 and launched their brand, Nike, named after the Greek goddess of victory, in 1971. In 1978, they renamed their company Nike, Inc., and listed it publicly two years later.

A few years into the 21st century, Nike had distributors and retail outlets in over 170 countries.

M. Frank Rudy is the brains behind Nike’s revolutionary Air technology. He came up with the concept of encasing air into a plastic bag to create a midsole for athletic shoes while working for NASA.

He approached various shoe manufacturers with his idea, but only Nike showed an interest. In 1980, Rudy patented his innovation and changed the future of sneaker technology forever.

After months of fine-tuning the air cushion to suit their sneakers, Nike first used Rudy’s AIR technology in 1978, when they released the Nike Tailwind, the great-granddaddy of the Air Max.

Almost ten years later, in 1987, the original Air Max appeared on the scene. The designer, Tinker Hatfield, based his creative efforts on the architecture of the Centre Pompidou in Paris.

Trained as an architect, Hatfield found the building’s inside-out approach appealing. This unique building features visible structural elements on the outside of the building.

This inspired him to create the now-iconic air window in his next shoe design, which shows the inner workings of the Air Max midsole.

A year later, Nike released the Air Walker Max. Designed for walking, this sneaker was a slightly bulkier, heavier version of the Air Max 1.

It had a leather upper and shared a few similarities with the popular Air Jordan 3.

Hatfield started experimenting with ever lighter versions of the original Air Max. The result was the Air Max light, released in 1989.

This sneaker ditched the original polyurethane midsole, using a new two-piece midsole made of Phylon. He also added 420 Denier mesh to improve breathability and added thermoplastic straps to enhance stability and support.

For the 1990 iteration of the Air Max, Hatfield opted for an even bigger Airbag, highlighting it with infrared accents and a larger window.

These kicks feature fluid lines throughout to emphasize action and motion and remain one of the most popular Nike sneakers to this day. In 1991, Nike released a similar Air max BW with an even bigger window to show off the iconic airbag feature.

Then they took things even further with the Air Max 180, designed by Air Force One creator, Bruce Kilgore. This sneaker featured a monstrous 180-degree view of the Air-Sole cushion.

They launched this shoe with the help of a host of special effects masters, legendary cartoonists, and movie directors.

In 1992, Nike took their air cushion design a step further by introducing a bigger air cushion with a forefoot unit, using Footbridge tech.

This new Nike deviated substantially from previous designs with an oversized heel counter, and comfy neoprene tongue, although it still embraced some of the most popular design features of the Air Max 90.

From 1993, Nike proceeded to release a new Air Max sneaker every year, now featuring a wrap-around view of the iconic air cushion.

Inspiration for this design came from a plastic milk jug, and the brand used blow molding to create 270-degree visibility in its new models.

Many of Nike’s 90s designs adopted this design, while each having a few unique design features to call their own.

A notable exception was the 1995 Nike Air Racer Max. Designed for competitive runners, the AM95 boasted a flatter sole, and a mostly mesh upper to minimize weight.

Nike went quiet after 1999, but it was back with a bang in 2003 with this lightweight sneaker emphasizing comfort and understated style.

The Air Max 2003 used Teijin performance material similar to that used in football boots and track spikes. After that came the Nike Air Max 360, released in 2006, and the first shoe cushioned entirely by air.

The brand placed a strong focus on lightweight flexibility until 2017 when it dropped another bombshell.

Billed as the pinnacle of Air, the VaporMax featured air technology into both the midsole and outsole, by incorporating it into one unit.

The sole maintains its shape using elasticity and together with the Flyknit upper, serves to create the sleekest Nike Air Max ever.

Since Nike has strayed from the realm of the pro-athlete almost from the start, the brand launched the first-ever Air Max for casual wear in 2018.

Every serious sneakerhead aspires to own a pair of 270 Air Max Nikes thanks to its modern take on classic Nike design and supreme comfort levels.

In 2019, Nike followed suit with the Air Max 720, boasting a futuristic design and 1.4-inch foot-cradling unit.

Go For the Win

Throughout the history of Nike, celebrities, sports stars and the man on the street have worshipped at the altar of Air Max, making it one of the most iconic and recognizable sneakers ever made.

Isn’t it time you added another pair of Nikes to your sneaker collection?

Would you like to find out more about life’s little luxuries? Browse our blog for all the best life hacks.