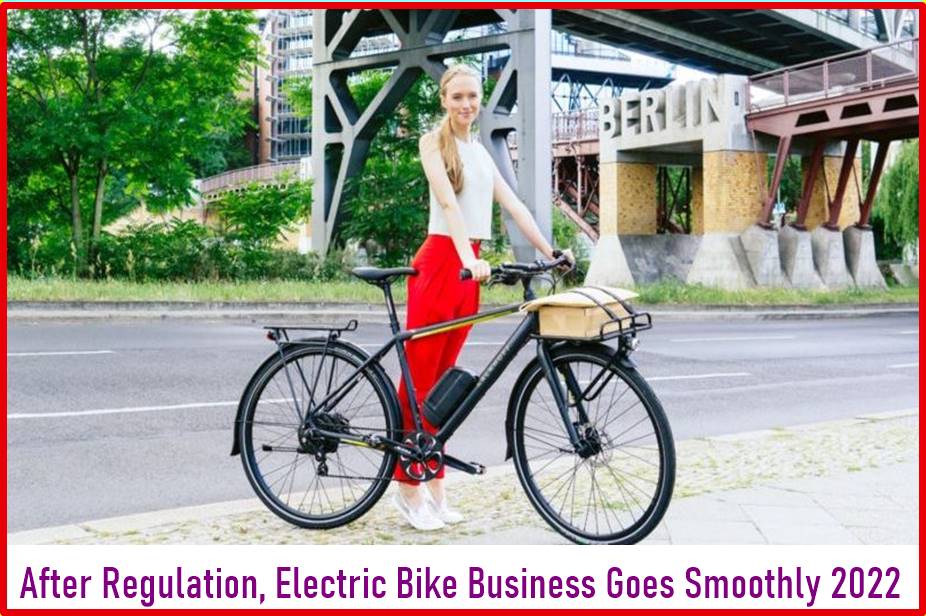 No Comments on After Regulation, Electric Bike Business Goes Smoothly 2023Posted in Information By Sahnwaj HusainPosted on 15/04/202224/11/2022

Today, we see more and more electric bikes on the city’s streets. The electric bike, also called e-bike, is nothing new: the first patents for this product date back to the 19th century. Ogdem Bolton Jr., in 1895, and Hosea W. Libbey, in 1897, were two of the first inventors to create models of electric bikes.

And the popularity of these bikes is increasing, as they are an alternative for getting around cities in a more conscious, healthy and fun way. Estimates indicate that, in 2020, there were 1 million electric bicycles circulating in the United States.

The hallmark of an electric bike, of course, is the fact that it has an engine. However, there are two different types of electric bikes, depending on how this engine works.

The first type is known as Pedelec. Pedelec bikes have an engine that is only activated when the cyclist pedals. Basically, they give an extra “motorized gas” to your pedaling. If you stop, the bike doesn’t continue alone.

The second type is electric bikes with accelerator. In this case, the bike can, yes, run on its own. The cyclist chooses whether to use the accelerator, pedal, or combine a bit of both.

It is important to say that you cannot define an electric bike simply as “a two-wheeled vehicle with an electric traction engine”. There are electric bikes for different purposes, including the use only for personal transport and the use for the practice of sports, and each one has its peculiarities. Furthermore, the rules for those who use this type of bicycle in urban traffic are unclear. There needs to be stricter regulations for the safety of everyone, including the cyclist himself.

The popularity of ebikes encourages many people to participate in various ebike businesses. One of them is ebikes rental. In some countries, the ebike business is highly dependent on imports, especially from China. Today, wholesale ebike sites such as Haidong Bike https://hd-ebike.com/ dominate the North American and European markets with a rush of ebikes being sold at relatively cheaper prices, of course, while still meeting the standards applicable in each importing country.

Guild and importers talk about the expectations that exist for this segment. New regulations allow the transit of these vehicles on bicycle lanes. They run on electricity and have become a solution to mobility problems in cities. In the case of our country, electric bikes began to be more popular and, after the recent regulation of these vehicles, their importers believe that an increase in sales will be generated.

There is a very high acceptance of alternative mobility. But there is a difficulty for the authorities to identify electric bikes, since some with larger engines could be closer to an electric moped. What identifies an electric bike is that it incorporates assisted pedaling, that is to say that an electric battery provides a power of up to 250W to complement the kinetic energy provided by the user. The maximum speed you can reach with this battery is 25KM / H, while the moped reaches more than 45KM / H.

The battery charging time is between 2.5 and 4 hours and its autonomy is 1 hour and 26 minutes. The durability of these lithium-ion batteries is 800 and 1,100 charge cycles, that is, if 15 km are traveled daily and two full charges are made weekly, it could last up to 10 years. Instead of people using a motorcycle for urban use, they can buy an electric bicycle for short trips.

The price of electric bikes like that of the rest of these vehicles that are not combustion engines should be reduced through a reduction in tariffs, not only to increase their use, but because it is a vehicle environmental friendly.

The regulation is fine, we do not oppose the way it was stipulated. That is fine, but it is still necessary to educate the cyclist, because some are reckless on the roads. That is why in large cities worldwide they are clear about it and apply regulations.

In the future, which increasingly involve alternative transport solutions, it will be more necessary to resort to regulations for the transit of cyclists.

This already happens in the UK, where the regulations require that before making a turn the arm be extended in the direction of the turn. In other parts of Europe it is required that the cyclist only travel on the right and in countries like Malta, for example, the use of helmets for cyclists is mandatory.

What these countries have in common is a road infrastructure adapted for bicycles. This is what is needed in the cities of our country, where there is still a need for greater investment in bike paths and exclusive lanes.